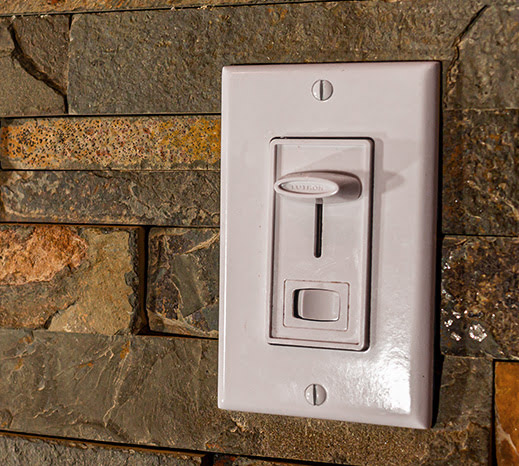 Dimmer switches can help you reduce your energy output, improve the ambience in your home, and save money on maintenance. While all dimmers provide these benefits to some degree, not all of these devices are built the same. In fact, different types of dimmers are designed to work with specific loads and lighting sources.

4-Star Electric has offered top-quality electrician services in Calgary and the surrounding areas since 1989, so we’ve installed more than our fair share of dimmer switches and are happy to share our knowledge. Below, we’ll show you the different types of dimmer switch you can buy and help you figure out which kind will be best for your needs.

Many older homes use dimmer switches with incandescent or halogen bulbs, which can be dimmed by creating variable resistance between the power supply and the load. Older versions of this technology simply introduced a resistor to the circuit, reducing the amount of current that reached the bulb and consequently causing it to produce less light.

The lower you wanted your lighting, the more resistance you’d introduce to the circuit—it’s a pretty simple concept. However, these dimmers were not particularly energy efficient, since a great deal of energy was transformed into heat by the resistor and then lost.

Modern incandescent dimmers use a technique called “phase control” to switch the light circuit off and on again rapidly—about 120 times per second. This is because household alternating current (AC) in North America changes direction 60 times per second, leaving two points per cycle when the voltage running through the current is zero. That’s when the dimmer turns the circuit off—it comes back on again at different points in the cycle, depending on the brightness level the switch is set to (the earlier in the cycle the current comes back, the brighter the light gets).

Because incandescent bulbs can be dimmed simply by adjusting the current, they have the largest controllable dimming range—0% to 100%.

Older incandescent dimmers are among the least energy-efficient, because of the amount of current that gets lost as heat when resistance is added to the circuit. However, modern incandescent and halogen dimmers that use the newer method are far more efficient since the circuit stays off for a portion of each cycle.

MLV dimmers use a transformer to reduce 120V AC current to 12 or 24V. When this lower voltage current is delivered to an incandescent or halogen bulb, it produces less light. You’ll often find MLV dimmers used in striplights (like under-counter lighting) and in tungsten halogen bulbs.

The transformers used in this process reduce the current via phase control, similar to the resistive incandescent dimmers described above—but the technology involved is different. Copper wound around a steel core allows energy to be caught and stored in a small magnetic field. Since standard incandescent dimmer switches can actually damage these transformers, special inductive dimmer switches are required instead.

These dimmers are generally easy to install, since they only require a single line voltage wire to run from the switch itself and another to the load.

The transformers used for MLV dimmers can be somewhat large and bulky, requiring extra space for the installation in some areas.

Fluorescent bulbs work differently from incandescent, halogen, or LED lights. Because they use heated electrodes to produce gas inside the tubes, they rely on dimming ballast to modulate light levels. Because of this, fluorescent bulbs are not compatible with traditional dimmer switches.

Since the vast majority of North American commercial businesses use fluorescent lighting, ballast dimmers provide an excellent way to save on lighting costs without having to pay for a retrofit.

Dimming a fluorescent tube by using ballast to regulate the gas inside is a more volatile process than the others listed above. As such, fluorescent dimmers can sometimes create sudden jumps or drops in brightness when adjusted.

When electrical current passes through an LED, it produces electromagnetic radiation that takes the form of visible light. The current delivered from your home’s power supply to the LED’s emitter is modulated by a driver—so to dim an LED bulb, you need to select lights with adjustable drivers in them.

Fortunately, LEDs normally list the dimming level of their drivers on the packaging—so when you’re shopping for LED lights, be sure to check and see how much you can dim them. You’ll also need a specific switch that’s capable of adjusting the drivers in your lights.

LED lights are much more energy efficient than standard incandescent bulbs—up to 90%.

Not all LEDs are dimmable, so it’s important to check the packaging before purchasing them!

Making the Most of Dimmer Switches

Now that you know about the different technologies available for dimmer switches, what kind should you use? Here are a few suggestions:

Smart dimmer switches can be wirelessly controlled via WiFi, Mesh, or Bluetooth—allowing you to control or program your lights from your device. You can either set them manually or choose preferences so that your lights change automatically (for example, having them change brightness levels at certain times of day).

Smart dimmers can save homeowners extra money by automatically providing light when and where you need it, and dimming or turning off the lights when you don’t. Our professionals will be happy to tell you more about how to set up a cost-effective smart lighting system for your home or business.

88 thoughts on “Different Types of Dimmers”