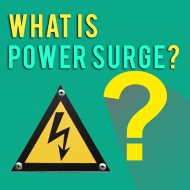 What are Power Surges?

A power surge is an increase in voltage significantly above the designated level in a flow of electricity. When the increase lasts three nanoseconds (billionths of a second) or more, it’s called a surge. If the surge or spike is high enough, it can inflict some heavy damage on your home’s electrical equipment, such as appliances and electronics; this is why it is necessary to have surge protection installed in your home and business. The effect is similar to applying too much water pressure to a hose.  If there is too much water pressure, a hose will burst.  The same thing happens when too much electrical pressure runs through a wire, the wire “bursts.”  It heats up like the filament in a light bulb and burns, but it’s the same idea. Even if increased voltage doesn’t immediately break your electronics, it will put extra strain on the components, wearing them down over time.

Power surges occur when something boosts the electrical charge at some point in the power lines.  This can increase the current flowing to your wall outlet.  A number of different things can cause this to happen.

The most familiar source is lightning, though it’s the least common cause.  When lightning strikes near a power line, whether it’s underground, in a building or running along poles, the electrical energy can boost electrical pressure by millions of volts.  This causes an extremely large power surge that will overpower almost any surge protection.  In a lightning storm, you should never rely on your surge protection to save your computer.  The best protection is to unplug your computer.

A more common cause of power surges is the operation of high-power electrical devices, such as elevators, air conditioners, stoves, furnaces, heaters and refrigerators.  These pieces of equipment require a lot of energy to turn on and off.  This creates sudden, brief demands for power, which upset the steady voltage flow in the electrical system.  While these surges are nowhere near the intensity of a lightning surge, they can be severe enough to damage components, immediately or gradually, and they occur regularly in most building’s electrical systems.

Other sources of power surges include faulty wiring, problems with the utility company’s equipment, and downed power lines.  The power system that brings electricity to our homes or offices is very complex.  There are dozens of possible points of failure, and many potential errors that can cause an uneven power flow.  In today’s system of electricity distribution, power surges are an unavoidable occurrence.

What causes surges in my home?

How often does my home get hit with surges?

Why would you install surge protection?

How does Surge Protection work?

When to Use a Surge Protector

So whether or not you should get a surge protector depends on what sort of device you’re hooking up to the power supply. You should definitely use a surge protector with your computer.  It is filled with voltage-sensitive components that will be damaged by a power surge.  At the least, this damage will shorten the life of your computer, and it could very easily wipe out all of your saved data or destroy your system.  Computers are very expensive items, and the data they hold is often irreplaceable, so it’s only good economic sense to invest in a quality surge protector.

It’s a good idea to use surge protectors for other high-end electronic equipment, such as entertainment center components.  A surge protector will generally extend the life of these devices, and there’s always a chance that a big power surge will causes severe damage.

One problem with surge protectors is  that its components can burn out with one good surge.  This is why it’s good to get a protector with an indicator light that tells you whether or not it’s functioning properly.

Even if you connect surge protectors to all of your outlets, your equipment might be exposed to damaging surges from other sources.  Telephone and cable lines can also conduct high voltage modem; you should get a surge protector that has a phone-line input jack.  If you have a coaxial cable line hooked up to expensive equipment, consider a cable surge protector.  Surges on these lines can do just as much damage as surges over power lines.

Most homes will require Surge protectors on incoming lines as there are many items that cannot plug directly into a surge bar. Generally if an item is the only item on a circuit in a home it will be covered by the main incoming surge protector, although doubling them up is never a bad idea. When an item is on a shared circuit then it would require a point of use surge protector as surges can come from within the home when larger items are connected to the circuit

Why didn’t we need surge protection in our homes 50 years ago?

The answer is that a lot of the components in sophisticated modern electronic devices are much smaller and more delicate than components in older machines, and are therefore more sensitive to surges.  This includes many home appliances and electronics.  These Electronics only function properly when they receive stable current at the right voltage.

Call a Qualified Electrical Contractor to install your surge protection

To ensure your home and it’s electrical contents are safe from surges, make sure you have a qualified electrician install the appropriate surge protection or you. To learn more, you follow this link for a great video. As well, you can always give us call to speak to a Master Electrician.

For all your electrical needs in Calgary and Area, call 4-Star Electric. Or visit us online.